Sprinting vs Jogging: Pros, Cons, and the Difference

If you’re considering running as a workout, you’re probably doing some research on it beforehand. Are you better off sprinting vs jogging? Does it even make a difference?

The short answer is yes. And whether you should be sprinting or jogging depends on what you want to accomplish (as well as what your body is able to safely handle).

The internet’s a valuable resource for runners, the variety of running options can get overwhelming. Some terms are erroneously used interchangeably by some, which is confusing for new runners. Running and jogging are not the same. Neither are jogging and power walks. And, in this case, neither’s sprinting and jogging.

Especially at the beginning of your runner’s journey, you’re going to see sprinting and jogging come up often. They can’t be used interchangeably, and each offers very different benefits and poses its own set of drawbacks. To help aid you, we’ve broken down what these running forms are and how they’ll affect your body.

Sprinting vs Jogging: What’s the Difference?

For clarity’s sake, let’s get this out of the way first. Sprinting is a form of interval running and speed play. You’ll expend your entire energy in 30-second intervals of exertion over the course of roughly 30 minutes (your mileage and capability may vary at first).

Jogging, by comparison, is like listening to smooth jazz. You’re at a pace that’s faster than a power run but slower than a regular run. You’ll maintain the same pace throughout the jog, as opposed to sprinting, which isn’t continuous. You also won’t be exerting yourself to nearly the same degree as sprinting, though you will be exercising for the same amount of time.

For those looking to lose weight, build muscle, or increase their cardiovascular health, the choice seems to be an easy one to make, but nothing is ever that simple.

What Are the Benefits of Sprinting? 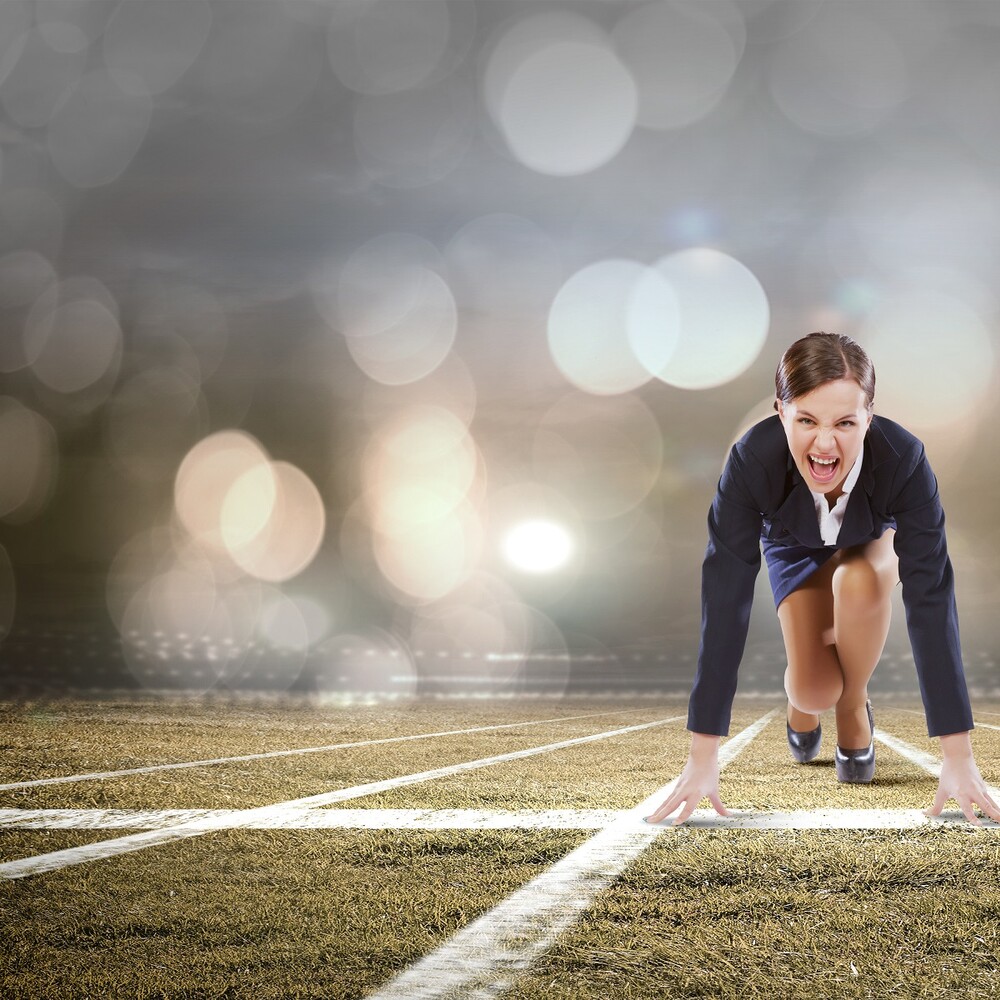 Let’s get into the weeds of it now.

Due to the amount of exertion involved, your heart rate will be jacked. It’s an incredible cardiovascular exercise, working at 90% to 95% of your body’s maximum heart rate. Sprinting also works as both an aerobic and anaerobic exercise. Since you’re probably new to all this, I’ll explain.

An aerobic exercise is any exercise that benefits your cardiovascular health. It requires heavy breathing and a quickened heart rate. This allows for more oxygen to enter your body, feeding your muscles, and building endurance over time. It also helps boost your mood and can help you live longer than those who don’t engage in aerobic exercises.

During your sprints, you’ll be pushing your heart and your muscles to their limits. It will help you tone your glutes, core (abs for all!), and obviously, your legs. However, due to the exertion, you’ll quickly have less oxygen to rely on for energy and replenishment. Instead, your body has to use its reserves to have your muscles continue to function. It’ll break down the glucose and excess calories in your body, helping you lose weight at a faster rate. Since you’re changing your speed rapidly throughout the sprint, your muscles will be in a constant state of flux. The fast twitching muscle fibers allow greater flexibility and an increased opportunity to grow.

To get an idea of what you’ll do in a sprint, we’ll give you an example.

It’s a time-efficient workout with great benefits. Naturally, it comes with downsides.

What Are the Dangers of Sprinting?

This isn’t exactly a Batman-level mystery. You’re exerting your body to its absolute limits – what do you think the downside is?

Of course, there’s a good chance, especially early on, that you’ll fatigue early. The workout is brief but when it’s organized like this – at this intensity – it can seem like perdition itself. There’s a good chance, indeed, that when you first start sprinting, you likely won’t be able to do all five or six sets of 30 seconds. If you feel that you’re incapable of going on, stop where you are. Don’t endanger yourself.

The most obvious downside is the increased potential for injury. Muscle strains are quite common among sprinters who aren’t careful in their application of the exercise. Don’t increase your sprint duration to longer than a minute. Only sprint up to three days a week and not on consecutive days. You can substantially decrease the chances of injury by stretching and warming up for at least 10 minutes before every sprint exercise and by doing a cool down jog after the sprint is over.

Another likely source of injury – especially for new runners – is joint damage. Since you’re running at your hardest, your strides are more impactful. You’ll feel increased stress on your feet at the heel, all the way up to your hips.

You’ll sprint safer if you pay attention to your running form. Your heel should never be the first part of your foot to strike the ground. It will slow you down and increase the likelihood of injury to an already vulnerable area.

However, the most dangerous element of sprinting also comes from its greatest benefit: the effect it has on your heart.

Sprints demand a great deal from your heart – running at its near maximum. This isn’t always healthy for some people. Those with high blood pressure, cardiovascular disease, or any type of heart-related malady should speak to a doctor before engaging in any sprinting or interval running. While you may not have any heart issues, adults 50 and over, should also speak to their doctor before sprinting.

What Are the Benefits of Jogging?

The benefits of jogging are the opposite of sprinting’s dangers. It’s a low impact exercise that doesn’t ask much of your heart or your joints. It’s an optimal exercise for those recovering from injuries who need to wake up muscle groups or those just getting into running as a way to increase their health.

Jogging offers cardiovascular benefits by working the heart out, though it won’t be beating at a higher rate like in sprinting. However, it will give you a boost in adrenaline and help release endorphins, which can relieve stress. The physicality of jogging itself can relieve stress my loosening muscle you’ve kept clenched and tight from, say, a hard day at work or an argument with a spouse.

For those new to jogging, we’ll give you a brief overview of what you’ll be doing. While you can jog every day, you should still have a day’s rest after consecutive days of running. This is especially true of those who are using jogging to help recover from an injury or have preexisting health issues. Like sprinting, you should consult your doctor before beginning.

But, for the sake of it, let’s say you’ve gotten the green light. Your jog should look like this.

What Are the Dangers of Jogging?

Well, there aren’t any dangers to jogging, exactly – provided that any aforementioned injuries and preexisting conditions have been discussed with your doctor. That’s one advantage of jogging vs sprinting.

But while jogging doesn’t have dangers, it does have an obvious disadvantage. Think about it. Is it faster to cross a channel in a speedboat or a rowboat? To be blunt, you won’t get all that far with jogging.

You can increase the length of your jogs or their frequency throughout the week, which should help you break through those plateaus – at least for a while. Of course, jogging too much can pose a potential injury risk, though that remains fairly low.

Jogging can be the right exercise for you depending on your capability and desires. It can also be the launching pad you need to fitness, increased health, or even to other forms of running – like sprinting.

Both sprinting and jogging have their benefits and their disadvantages.

So, sprinting vs jogging: what’s right for you?

The best part of that question is that there’s no wrong answer. Let us know yours in the comments below.

Blog
How To Increase Stamina for Running
read more >>

Blog
Can Running Give You Abs?
read more >>

Blog
Forefoot Running: Everything You Need To Know
read more >>

Blog
How To Increase Stamina for Running
read more >>

Blog
Can Running Give You Abs?
read more >>

Blog
Forefoot Running: Everything You Need To Know
read more >>

Blog
How Important is Sleep to Runners?
read more >>

Blog
What Are Tempo Runs, How to Do Them and When?
read more >>

Blog
Recovery Runs: How to Do Them Right
read more >>

arm sleeves
Thank youfor your comment on our website!
Free Shipping & Returns on US Orders Over $60
go to shop
Rockay Rewards$0.00
Welcome to Rockay Rewards:
faq
Rockay Rewards
Bonus
Shop at Rockay.com!
Earn 10% back on every purchase to be applied towards future orders

join now
Already have an account? Sign In
FAQ
FAQ:
We value loyal customers!
We have created a loyalty program in order to reward customers who enjoy using Rockay products on a regular basis. We grant 10% credit for every purchase you make in our shop to use for your future purchases.
How to join the Rockay Rewards?
Customers with Rockay accounts are automatically enrolled. If you do not have an account, join Rockay.com today by clicking here to create your account. It is absolutely free!
How to earn credit?
You will earn 10% credit on every purchase you make in Rockay shop. Purchases made with a gift card will not add points to your account.
How to redeem rewards?
You can use your credit at any moment for any purchase. There is no minimum amount that you can use.
How to use rewards?
Rewards are given to you as credits. You can tick the box at checkout to apply your credits on any order you want.
Can I use Rockay Rewards together with other coupons and/or promotions?
Rockay Rewards' credits cannot be used in conjunction with other coupons and discounts.
Who are referrals?
With your coupon your friends will get $5 off their first order and you will get a $5 credit added to your Rockay Rewards balance. Send your code to 10 friends and get a max credit of $50!
are you sure?

Last Chance! - You can get free shipping and 10% off any additional items! This is a 1 time deal for new customers only.
Yes, let me have a look first No, just want 1 pair for free
Want a Restock? We will have this item in the inventory soon! Let us know that you want to have it by entering your email, and we'll contact you when we get this item in stock!
Share this